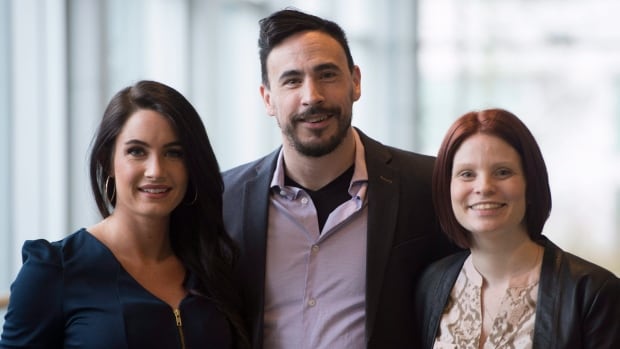 Emily Travis, left to right, Myles Himmelreich, and C.J. Lutke are the researchers behind a survey that found adults with fetal alcohol spectrum disorder suffer from other medical conditions at higher rates than the general population. (Jonathan Hayward/The Canadian Press)

Myles Himmelreich has struggled with significant joint pain since he was a teen, yet he didn’t get a proper diagnosis of arthritis until he was in his mid-30s.

His young age and the fact he is diagnosed with fetal alcohol spectrum disorder may have prevented doctors from considering testing his joints sooner — a problem he says is all too common for adults with the disorder, a spectrum of irreversible developmental issues resulting from alcohol exposure in the womb.

Himmelreich, CJ Lutke and Emily Travis co-authored a survey of 541 people living with the disorder in Canada and the United States to see how commonly they experience other physical and mental health conditions. Their findings are being presented Saturday in Vancouver at a conference hosted by the University of British Columbia.

Of over 260 questions pertaining to conditions in 25 areas, such as hearing, autoimmune or cardiovascular disease, they found that people with the disorder experienced health problems at a rate that was anywhere from two times to more than 100 times higher than the general population.

The three authors, who all live with the disorder, met at a previous international conference and advocate to reduce stigma about the disorder. They had the idea for the survey in 2013 while discussing their array of health issues and hearing similar complaints from others.

Completing the survey, they were surprised to find how prevalent those health problems are.

“Do our bodies age and break down faster? I think it seems like it. There are times where I especially feel like an old lady,” said Lutke, 33.

Among the general population, about five to eight per cent of people suffer from a total of 80 autoimmune diseases. Yet the survey found that 29.5 per cent of people living with fetal alcohol spectrum disorder who were surveyed reported having at least one of only 10 of those diseases, including rheumatoid arthritis, celiac disease and lupus.

The rate of chronic ear infections among adults who were surveyed was 147 times higher than the general population, and 8.1 per cent of those who took part in the survey reported having hearing loss or problems that began after the age of 20.

Early onset dementia, which happens in people under the age of 65, also affected people in the study at a rate that is 104 times higher than the general population. The average age of respondents in the survey was 27 ½ years old.

Himmelreich said the premature development of diseases means that sore knees in teens can be written off as growing pains or wear and tear rather than something more complex.

Depending on the condition, there can be serious implications of going undiagnosed and untreated.

With 90 per cent of respondents reporting trips to the emergency room and multiple hospitalizations, Lutke said she wonders if misdiagnoses or failure to test symptoms are to blame.

“How many disorders are diagnosed as mental issues when they actually have a physical cause?” Lutke asked.

The vast majority of studies on people living with the disorder have looked at children rather than adults, and many have focus only on behaviour, cognitive development or physical characteristics.

Himmelreich said their goal with the survey findings was to raise new questions in the medical community about the effects of the disorder and encourages clinicians to think about their patients differently.

“We want them to see FASD as not just the brain, because we know and understand so much information about the brain, but also to see how it’s affecting the whole body,” he said.

In the coming months, the team intends to work on having their findings published to reach a broader audience.